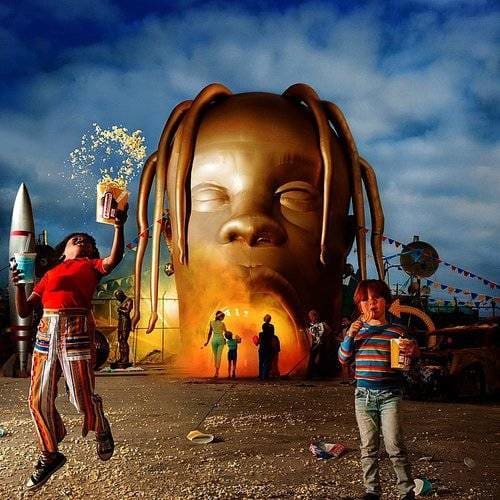 American rapper, singer, songwriter and record producer Travis Scott released a long-awaited third studio album, Astroworld, following his second album release, Birds in the Trap Sing McKnight in 2016 and his collaborative album Huncho Jack, Jack Huncho with Quavo that was released in 2017. The album Astroworld is titled after a famous amusement park known as Six Flags Astroworld which was located in Houston, Texas. In 2005, the park was demolished, and in a 2017 interview with GQ, Travis Scott spoke about the prominence of his park and how much impact it has on the album. He said “They tore down ‘Astroworld’ to build more apartment space. That’s what it’s going to sound like, like taking an amusement park away from kids. We want it back. We want the building back. That’s why I’m doing it. It took the fun out of the city”. The album was released on the 3rd of August, 2018 by Epic Records, Grand Hustle Records, and Cactus Jack Records. Astroworld features some guest vocals like Drake, Quavo, Philip Bailey, Frank Ocean, Nav, 21 savage, Kid Cudi, Gunna, James Blake, Swae Lee, Juice Wrld, Don Toliver and some others. Multiple producers handled the production of this awesome album, like Tame Impala, Frank Dukes, Allen Ritter, Tay Keith, Mike Dean, Sonny Digital, Thundercat, and Hit-boy. The album consists of 17 amazing songs like No bystanders, Stop trying to be God, Coffee Bean, Astrothunder, Wake up, Stargazing, Sicko mode, Can’t say, to mention but a few. To support the album Astroworld, Travis Scott has announced the ‘wish you were here’ tour that started in Baltimore at Royal Farms Arena on the 8th of November, 2018 and will end in Charlotte at Spectrum Center on the 24th of March, 2019. As he had announced on his Instagram on August 16, 2018 “I’ve Been Ready to Get Back On the Road for A Long Time!! Astroworld Tour Is Finally Here!!”

In the celebration of Astroworld and Travis Scott, merch will definitely be needed and Streetgarm has got you covered! There is no merch like customized hoodies and Streetgarm has been tested and trusted to deliver unique and excellent products. It doesn’t fall short in producing unique hoodies, and the ‘wish you were here’ hoodie is one extremely stylish item that is available and on sale at Streetgarm and Streetgarm is willing to ship the hoodie to wherever you are in the world.

As is known of all Streetgarm products, the ‘‘wish you were here’’ hoodies are of high standard and it features high quality embroidery on the front, and the wonderful ‘‘wish you were here’’ print design sits neatly on the back. This excellent ‘wish you were’ hoodie has been seen on a lot of celebrities, like Kylie Jenner. This merch is a must have as it gives you style and comfort!